On the ropes during the 75 hour Czech Adventure Race

Preparing our navigation during the Raid in France ARWS 2016 (picture Kirsten Oliver).

Dragging our cayaks over the beach during the Raid in France ARWS 2016 (picture Kirsten Oliver).

In 2018 we will be back for two longer races in 2018. We're planning on racing the following two races, along with our 'normal' schedule of trail running races and mountain biking:

The Raid in France is a 150h non-stop Adventure Race. We participated for the first time in 2016, which incited our dream to do this race again, but this time, faster.

In 2016, our goal was to just finish this race, and to see whether our bodies and minds enjoy racing for such a long time with such little sleep. It was our first race of this calibre: the length, rugged terrain, and first race of the Adventure Racing World Series. We had no aim but to finish, which we did. We surprised ourselves with finishing 13th overall, even though one of our team mates had severe stomach issues. At the finish line we learned that we had a lot to spare, and this year we're keen to find out where we can go next.

When we learned that this race will be the World Championships for 2018, we didn't need to think twice. Here's the 2018 teaser:

We will race this race, along with lots of training and trail running races, in order to prepare for the World Championships. We want to refine our strategies, speed up our transitions and build on each others' strenghts even more. Poland seems like a great place to practice our skills, with what looks like an exciting race in rugged terrain!

Selection of our results:

Keep going. Just keep going. Day and night. Whether it's 10, 40, 75 or 175 hours non stop. Running, mountain biking, kayaking, climbing, swimming. Whilst knowing where you are and where you're going to. Navigation is crucial. Cereal bar after cereal bar. Fighting sleepmonsters. Pursuing your own strategy. Twenty minutes of sleep or 'hanging on' to your team mates to be able to 'sleep on the move'.

What is Adventure Racing? 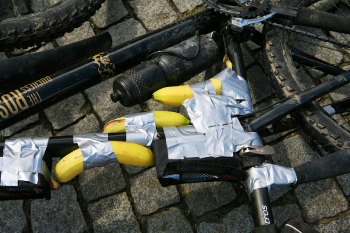